It’s out: the fifth annual ranking, from the World Economic Forum, of how 134 world economies are faring in providing gender equality to their citizens in four key areas: economic participation, education, political empowerment and health. As in past years, Nordic countries come out on top. The top five-ranked countries in 2010 are the same as they were in 2009: 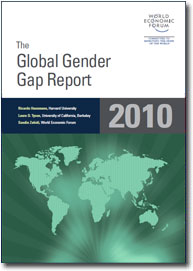 The Global Gender Gap Report’s index assesses countries on how well they divide resources and opportunities amongst male and female populations, regardless of the overall levels of these resources. The report measures the size of the gender inequality gap in four areas by tracking the following indicators:

As this is the fifth year of the effort, the report contains some assessments of progress made. Among 144 economies studied in all five years, 86% show progress in narrowing gender gaps in these areas, while 14% are regressing.

It’s also the case, however, that progress has been uneven, taking place in some areas of empowerment more than in others. It is no surprise to Womenable that progress in greater gender parity in economic empowerment is lagging the most. Says one of the study’s co-authors, Ricardo Hausmann, Director of the Centre for International Development at Harvard University, “We have found that gaps are closing between women and men’s health and education – in fact, current data show that in the 134 countries covered, 96% of health gaps and 93% of education gaps have been closed. And, yet only 60% of economic participation gaps have been closed. Progress will be achieved when countries seek to reap returns on the investment in health and education of girls and women by finding ways to make marriage and motherhood compatible with the economic participation of women.”

To read the study’s press release or to download and read the full report, click on these links, or go to the main WEF Gender Gap Network web page. It’s worth putting on your Womenabling reference shelf!