Starting back in 1995, the Global Media Monitoring Project began documenting the extent to which women’s voices, faces and stories were being covered in the world’s news media. From 71 to now 108 countries, researchers gather data on who is covering and reporting news stories, who is being interviewed, and what the stories are all about. As stated in the report, this effort has documented “the deep denial of women’s voices in the world’s news media.” 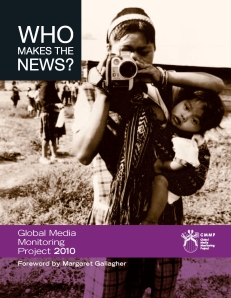 A fascinating new report, “Who Makes the News? The Global Media Monitoring Report 2010,” has been published tallying up the figures. The result? Some moderate progress has been made, but the faces and voices are still predominately male, and stories focusing on women still reinforce many gender stereotypes.

Here are some highlights: