The Womenabler has long been a fan of BBC Radio 4’s Woman’s Hour – we download and listen to many a show on our long womenabling flights around the globe. Last year, Woman’s Hour followed the trials and tribulations of three women entrepreneurs, pairing them up with mentors and discussing their entrepreneurial growth pains at regular intervals during the year. It was fascinating, illuminating and – we would guess – very inspirational for listeners thinking of starting and growing their own businesses. 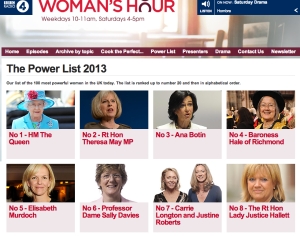 This year, they’ve set a new high bar – announcing a Power List of the 100 most powerful women in the UK. The build-up to the announcement was interesting to listen to, as they highlighted the advancement – or lack thereof – of women in business, politics, education, science and sport. It was a thoughtful, open process and the list is an interesting mix of the elite and the street-smart. Of course, #1 on the list is Queen Elizabeth, and many of the others in the ranked top-twenty lists are Dames and Right Honorables (position defines clout, in the UK and elsewhere). However, the list also includes such built-it-not-born-into-it women as singer Adele, noted architect Zaha Hadid, author JK Rowling, and a variety of women in sport, business, politics and civil society.

It’s a wonderful mix of women from a variety of walks of life, and generations, but some have commented that it’s not a very ethnically diverse list and that there were political and face-saving motivations for embarking upon this quest. But then, the halls of power are still relatively homogenous. By our eye, this women’s power list is much more diverse on so many levels than a gender-blind power list would be. And, whatever the motivations may have been, it’s a wonderful window on the world of women’s influence in the United Kingdom, a good conversation-starter about who may be missing from the list, and a feather in the cap of a fine radio program that, in our view, deserves more than a moment in the spotlight.

Check out the Woman’s Hour Power List, the stories behind how the list was chosen, and some of the commentary following the announcement of the list – including the chagrin of some that the Duchess of Cambridge was not included in the list.