For the fifth year running, Womenable has combined forces with American Express OPEN to analyze trends in women’s enterprise growth and development. The 2015 State of Women-Owned Businesses report (which will soon be published) tells us that: 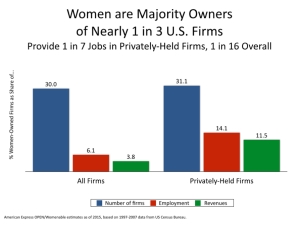 In fact, since 1997 there have been an average of 608 net new women-owned firms launched each and every day – and the rate just over the past year stands at 887 per day. The number of women-owned firms is increasing at a rate 1-1/2 times the national average.

The 2015 State of Women-Owned Businesses Report, like its predecessors, contains a wealth of empowering facts, figures and insights. The full report is being formatted now, but until it’s publicly available, click on the link below to download the summary tables, containing all of the statistics at the national, state, metropolitan, industry and ethnic group level.