Friends of Womenable: I have been diagnosed with brain cancer (glioblastoma) and am currently undergoing treatment. The cancer was discovered in September at Munson Medical Center after I began having trouble with speech and wasn’t feeling quite myself. I am receiving great care here in northern Michigan at Munson’s Cowell Family Cancer Center, after consulting with oncologists at University of Michigan Health Systems. At this time, I must take a pause in the work of Womenable and focus on my treatment. 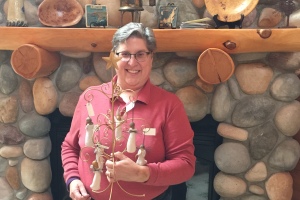 I have been overwhelmed by the support and love I have received from my local community including my women friends and my Leelanau Conservancy friends, and my friends from around the world.

My wonderful husband, Walter, has been by my side constantly and we continue to take our morning walks in the beautiful environs I live in. Nature, along with people, is buoying my spirits and keeping me grateful for all that I have. Life is good—even with brain cancer!

I will begin radiation treatment in late October as well as chemo. The battle ahead is daunting and won’t be easy, but I am determined to fight as hard as I can to kick this invader out of my brain and to enjoy the gifts that come with each day.

I’m doing my best to stay positive, and appreciate all of your good thoughts. I am also posting regularly on my Facebook page (Julie Weeks) but it’s difficult for me at this time to type/reply to posts or email.
Please know, however, that I am energized and lifted by hearing from you. Thank you.

~Julie Weeks (thank you Carolyn Faught for writing this for me)

In November, I attended and spoke at the Institute for Small Business and Entrepreneurship‘s pre-conference women’s enterprise policy day. My 25-minute presentation was entitled, “Building a Women’s Enterprise Movement That Will Stand the Test of Time: Lessons From the U.S.‘” It aimed to reflect on the recent silver anniversary of the passage of the Women’s Business Ownership Act of 1988, to share lessons learned from the U.S. experience, and to offer observations of the common elements that bolster and strengthen a healthy and vibrant women’s enterprise ecosystem – which could be adapted for a variety of political systems and development contexts.

Here, then, is a Slideshare Slidecast of the presentation, which you can watch and listen to as you munch on your lunch. Or, fellow womenablers, feel free to download it and play it at your next women’s business organization member gathering or networking event to fuel further discussion about what ideas you might take forward in your own community. Go forth and multiply!

With the support of American Express OPEN, Womenable has reported on trends in the growth and development of women-owned enterprises, drawing upon detailed information from the U.S. Census Bureau, since 2011.

In our inaugural report, The American Express OPEN State of Women-Owned Businesses Report: A Summary of Important Trends, 1997-2011, we provided up-to-date estimates on the number, employment and revenues of women-owned firms, and shared the insight that – despite above-average growth in the number of firms – women-owned businesses were not progressing up the business size continuum.

Our 2012 report, The State of Women-Owned Businesses Report: A Summary of Important Trends, 1997-2012, again provided up-to-date estimates of the number and growth of women-owned firms, and took a more detailed look at the economic clout of women-owned firms regionally and within industry – finding that women-owned firms in two industries (construction and transportation) were standing toe-to-toe with their industry peers with respect to the share generating $500,000+ in revenues.

With our most recent installment in the series, The 2013 State of Women-Owned Businesses Report: A Summary of Important Trends, 1997-2013, we again provide women business owners and their associations, supporters of women’s business development and other stakeholders with the most comprehensive review and analysis of the current health and well-being of women-owned firms in the United States – as well as in all 50 states and the 25 most populous metropolitan areas. Further, the report expands its focus this year to look at the phenomenal growth of firms owned by women of color.

Among this year’s key findings are:

For the fourth straight year, we devoted our end of year e-newsletter to a review of the most noteworthy womenabling events of 2012. Just in case you don’t subscribe to our quarterly e-news (CLICK HERE  if you’d like to do so), we’ve repeated here our list – in no particular order – of the ten most important research reports, events, and emerging trends of the year:

And, just for good measure, here are links to some other Top Ten lists you might be interested in:

Did we miss any critical items? Think we’re off the mark on any of the above? Let us know! Curious to compare this list with our previous Top Ten lists? Click on the following links to read our Top Ten womenabling events of 2011, 2010, and 2009.

Womenable President and CEO Julie R. Weeks testified at a recent hearing of the Senate Committee on Small Business and Entrepreneurship, entitled “Creating Jobs and Growing the Economy: Legislative Proposals to Strengthen the Entrepreneurial Ecosystem.” Weeks was one of eight witnesses invited to address the committee. Other witnesses included officials from the U.S. Small Business Administration, a representative from the National Federation of Independent Business chapter in Maine, an official from the Granite State Economic Development Corporation, and business owners. Weeks spoke as an expert in women’s enterprise development, and as chair of the Association of Women’s Business Centers.

The hearing, held on November 29th, focused on actions that the Committee could take now and early in the next Congress to spur small business growth and job creation. Weeks’ testimony, which can be downloaded and read in its entirety HERE (PDF file with active source links) or HERE (HTML on the SBC website), offered three specific policy recommendations:

The hearing was also significant in that it was the last Senate Small Business Committee hearing to be co-lead by retiring Senator Olympia Snowe – who has been a champion not only of small business development in general but of women’s enterprise development in particular during her storied 35-year Congressional career. Weeks concluded her testimony with a tribute to Snowe, saying,

“Finally, if I might be so presumptuous to speak on behalf of the entire women’s enterprise development community, I would like to recognize that, ever since she came to the U.S. Congress in 1978, Senator Olympia Snowe has been a vocal supporter and forceful advocate for women’s entrepreneurship issues without equal in the U.S. Congress. Her support and thought leadership on behalf of the women’s business center program, on federal procurement issues, on SBA entrepreneurial development coordination and impact evaluation, on the National Women’s Business Council; her inclusiveness in calling advocates to the table to discuss challenges and solutions; and the collegial way she has led the Senate Committee on Small Business and Entrepreneurship as both Chair and Ranking Member is unparalleled and is a shining example of the best in national politics and policymaking. Her voice and leadership will be sorely missed by all of us.”

All in attendance gave Senator Snowe a standing ovation near the start of the hearing.

A press release issued by the Committee can be read HERE, and video from the 2+ hour hearing can be viewed on the Senate SBC video archive or on C-SPAN.org. (Weeks was the last of the panelists to testify.) 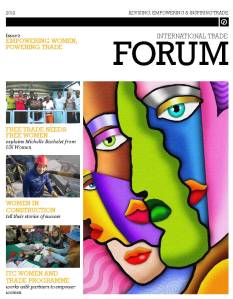 Accessing new markets is an important avenue to greater growth for businesses, and a more laser-like focus on issues of spurring growth among women-owned enterprises is the next stage of the women’s enterprise movement. So says Womenable President & CEO Julie Weeks in an article in the most recent issue of the International Trade Centre’s International Trade Forum. Download and read the entire issue, Empowering Women, Empowering Trade at this link.

The ITC is helping fuel this next stage for women’s enterprise development in two exciting ways:

I’ve found myself pondering this question, as school sessions get underway. Earlier this year, I visited Kosovo and Macedonia, speaking on the topic of women’s entrepreneurship (naturally) to a number of audiences – including a high school class in Tetovo, a town not too far from Macedonia’s capital city, Skopje. It was a fantastic experience, and I was delighted to engage in a lively dialogue with the students, male and female alike.

While there, though, I learned that the school classes are segregated within the same building, with the classes being taught in Macedonian (with a largely Eastern Orthodox Christian population) held at different times of the day or on different days than those taught in Albanian (for a largely Muslim population). It reminded me of another trip not too long ago to Belfast in Northern Ireland, where – although “the troubles” have largely quieted down – Protestant and Catholic neighborhoods are still separated by cement block walls and students still go to separate primary and secondary schools. This was actually even the case for me in my Arlington, Virginia elementary school neighborhood in the early 1960’s, where a wall separated white and black neighborhoods and schools were not integrated until my third grade class, after the implementation of the Brown vs. Board of Education Supreme Court decision abolished the “separate but equal” segregation practices of the past.

While language and cultural preservation is an important concern, if children are taught separately in that manner from a young age, how are we ever going to get along? Further, while some tout the value of separate classes or even schools for girls (where some studies show that they may learn better and be better prepared to take on leadership positions after graduation), others decry that position and say that separate education, even by gender, perpetuates existing societal divisions (see an excellent article from a few years ago by Wendy Kaminer in The Atlantic on this point).

We do all have to get along in a multi-cultural world, with different points of view and varied life experiences. The more we understand each others’ points of view, the better off we will all be, and that education and exposure to diversity should start in primary school. What do you think – is separate ever equal?