October 25th, 2013 marks the 25th anniversary of the Women’s Business Ownership Act of 1988 in the United States – which is frequently referred to as the “big bang” of women’s enterprise. The law extended equal access to business credit to women business owners, directed the US Census Bureau to include all women-owned firms in its business census, established the women’s business center technical assistance program, and established the National Women’s Business Council – giving women business owners a seat at the federal policymaking table.

Women’s enterprise development does not always have to be sparked by legislative action. In May 2003, a Strategic Framework for Women’s Enterprise was launched by the Labour government in the United Kingdom, which led to a number of positive programs for women’s enterprise development. Unfortunately, a party-launched initiative can fall by the wayside when leadership changes hands – as happened in the UK in 2010, when Conservative David Cameron became Prime Minister and promptly cut funding for women’s entrepreneurship, and indeed for small business development support in general.

This happened as well in Canada,  not too long after their Prime Minister’s Task Force on Women Entrepreneurs – Report and Recommendations was unveiled with great promise but unfulfilled potential. The report was launched in October 2003 – just two months before Prime Minister Jean Chretien left office. Even though his successor was of the same party, the initiative did not gain traction.

The Womenabler has long been a fan of BBC Radio 4’s Woman’s Hour – we download and listen to many a show on our long womenabling flights around the globe. Last year, Woman’s Hour followed the trials and tribulations of three women entrepreneurs, pairing them up with mentors and discussing their entrepreneurial growth pains at regular intervals during the year. It was fascinating, illuminating and – we would guess – very inspirational for listeners thinking of starting and growing their own businesses.

This year, they’ve set a new high bar – announcing a Power List of the 100 most powerful women in the UK. The build-up to the announcement was interesting to listen to, as they highlighted the advancement – or lack thereof – of women in business, politics, education, science and sport. It was a thoughtful, open process and the list is an interesting mix of the elite and the street-smart. Of course, #1 on the list is Queen Elizabeth, and many of the others in the ranked top-twenty lists are Dames and Right Honorables (position defines clout, in the UK and elsewhere). However, the list also includes such built-it-not-born-into-it women as singer Adele, noted architect Zaha Hadid, author JK Rowling, and a variety of women in sport, business, politics and civil society.

It’s a wonderful mix of women from a variety of walks of life, and generations, but some have commented that it’s not a very ethnically diverse list and that there were political and face-saving motivations for embarking upon this quest. But then, the halls of power are still relatively homogenous. By our eye, this women’s power list is much more diverse on so many levels than a gender-blind power list would be. And, whatever the motivations may have been, it’s a wonderful window on the world of women’s influence in the United Kingdom, a good conversation-starter about who may be missing from the list, and a feather in the cap of a fine radio program that, in our view, deserves more than a moment in the spotlight.

Check out the Woman’s Hour Power List, the stories behind how the list was chosen, and some of the commentary following the announcement of the list – including the chagrin of some that the Duchess of Cambridge was not included in the list.

I’ve been traveling lately, participating in a panel on the value of mentors and role models for would-be women business owners, presenting a paper on what gets missed when business enabling environment assessments don’t include gender, speaking at the We Own It Summit in London – and meeting with a group of women’s business advocates in the UK about moving forward with new efforts in moving women’s enterprise development forward there in the wake of organizational and governmental change.

I’ve uploaded the presentation I delivered at this strategy session here:

While it’s a bit long for a quick review (just under 28 minutes), you might want to bookmark it and watch it some morning with your caffeinated beverage, or at the end of the day with a more relaxing beverage.

So, on the eve of Independence Day here in the USA, let freedom ring for enterprise creation and growth around the world. Perhaps these thoughts and lessons learned can help in that regard. Onward and upward, sisters and brothers in arms!

In our year-end e-newsletter, rather than summarizing the latest womenabling news and providing womenablers everywhere with insights to educate, enlighten and empower your efforts, we’re ending the year by compiling what we feel are the most interesting and relevant activities that have taken place in the field of women’s enterprise development in 2010. Repeated here, and in no particular order, are what we see as the ten most noteworthy trends and events of the year:

A newly-discovered report from the European Microfinance Network takes a comparative look at the environment for women’s enterprise development in eight countries – assessing relative levels of gender equality on six dimensions – and highlighting good practices in support for women’s entrepreneurship. It’s definitely worth a read, and worth a spot on your womenabling reference shelf. 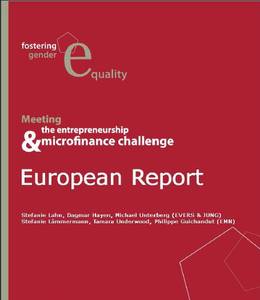 The report, “Fostering gender equality: Meeting the entrepreneurship and microfinance challenge,” takes a look at the state of affairs for women’s enterprise development in eight countries (Belgium, France, Germany, Hungary, Norway, Slovakia, Spain and the UK), and finds only average progress on these six dimensions:

The countries are rated most highly on general gender equality in society, and lowest on support structures for women’s enterprise development. There was the most variability in ranking among the eight countries on the access to finance dimension. Scores are calibrated on a 1-5 scale. In no country and on no dimension did any country garner a 4 or higher.

One of the best features of the 76-page report is its reference to good practices in the countries studied. Some of the policies and practices that are highlighted include:

For more information on the European Microfinance Network, and to download the report, click on the links above. Thanks go to Zunia.org, a wonderful development news aggregator, for highlighting this report.